At present, the Classicist Chateau building is home to the Regional Museum of Teplice. On its place a Romanesque convent of Benedictine nuns used to be located, founded in the 12th century by Queen Judith, the second wife of the Czech King Vladislaus II. During the Hussite Wars, the convent was plundered and the nuns left it. The Chateau's history begins in the 16th century when Volf of Vřesovice gained the Teplice estate and decided to build a respectable residence here. During the Thirty Years' War the following owners, the Vchynský family, lost the estate together with the Chateau by confiscation and Field-Marshal Johann Aldringen became its new proprietor. The Clary-Aldringen family held the Teplice estate in their possession since 1634 till the end of World War II. They held a prominent position at the court and endeavoured to cultivate Teplice's social life. They had the Baroque west wing with stables built, as well as the Garden and Ball House, likewise in the Baroque style. Behind the Chateau, a vast Chateau Park was established; in line with fashion, it was originally designed in the French style – with rare flowers, mazes, fountains and grottos, later it was remodelled into an English park. Clary-Aldringens' coat of arms may be seen on the Classicist portal above the Chateau entrance.

You can visit the Museum's permanent exposition of balneology, archaeology, ceramics and china, Gothic and Baroque art, or you can see the Chateau interior. Recently, a new Romanesque wing with the exposition "Tracing Back Teplice's Defunct Convents" was opened. It is also possible to visit the crypt in the former basilica. Nearby, in the separate north side chapel, Queen Judith's remains were found. 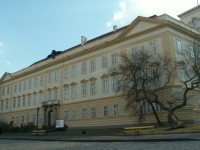