Teplice can boast examples of Romanesque, Gothic, Renaissance and mainly Classicist and Empire architecture, but there are not many preserved Baroque monuments. An exception is The Holy Trinity Plague Column in Chateau Square.

In Catholic countries columns similar to the one in Teplice used to be built in the 17th and 18th century as a thank-you or a request for protection. They attained their special importance in times of plague. Bohemia suffered the worst plague epidemic during the Thirty Years' War, i.e. in the first half of the 17th century. The Black Death raged in the Czech lands in 1713, too, but it avoided Teplice; therefore, the Teplice estate owner of that time, Franz Karl Clary-Aldringen, had this magnificent column of splendid artistic rendering erected. The column was also to commemorate reconciliation among four brothers of the Clary-Aldringen family.

The contract was awarded to the workshop of Matthias Bernard Braun, who authored the famous sculpture decoration at the East-Bohemian chateau of Kuks and the Duchcov Chateau. Assisted by a local stonemason Baumel, Braun carried out the contract between 1718 and 1719; the column represents Braun's highest work.

The column was originally conceived as a fountain, nowadays no longer in operation. The monument is dedicated to the Holy Trinity. On the earthly sphere God the Father and Jesus Christ as the Son are seated, with the Holy Ghost in the form of a golden dove perching above them. In the lower part six saints can be found. Saint Charles Borromeo is rendered with a cardinal's hat. He was an archbishop in Milan, looked after the diseased during a plague epidemic, sacrificing all his property and his life. The saint with a dog is Saint Roch. Legend has it that he survived the Black Death only thanks to his fervent prayers and the loyalty demonstrated by his dog, which, during Roch's sufferings, would bring him cob loaves to his hermitage in the woods. The last saint is Saint Sebastian, tied in chains and pierced with arrows. All three were worshipped as patrons against plague. The three above them are Saint Jerome with a skull and the bible, Saint Paul looking towards the "Stadt Klagenfurt" house, and finally, with a golden cross, John the Baptist, patron of Teplice.

In the past, the column was damaged several times. At the end of the nineteenth century, three sculptures were replaced with copies and the original pieces are now exhibited in the Duchcov Chateau's collection of stone monuments. 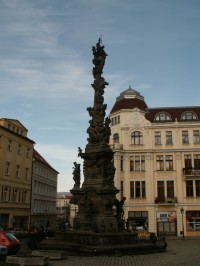