Elevation of the Holy Cross Church

The older of the two churches located in Chateau Square is a neo-Gothic structure directly connected to the Chateau. Although it received its final appearance only in the 18th century, the original temple had been constructed by the Teplice estate owner Volf of Vřesovice between 1549 and 1568.

Thus, the original church had been of late-Gothic style. Under where nowadays an additionally attached plinth can be found, preservationists discovered typical Renaissance sgraffiti; in Teplice, similar sgraffiti may at present be seen only on Kolostůj's Spires. In the seventeenth century, the newly-added Saint Anthony's Chapel extended the building towards the square; afterwards, the church was completely rebuilt. As a result of the remodelled exterior as well as interior, the church became one of the first examples of Romantic-Gothic architecture in our country.

Since 1950, it has served as an Orthodox Church of the Exaltation of the Holy Cross.

Under the church there is a crypt where Volf of Vřesovice himself is buried.

The church interior may only be seen on Sundays during regular services. Their schedule is placed on the church notice-board. 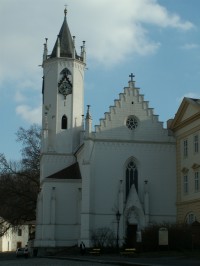