Object No. 24 | U Divadla street, Teplice

Karel Hubáček belongs to the few distinctive personalities of the Czech architecture who left their footprints in Teplice. The Civic Centre was built according to his design between 1977 and 1986. The author, well-known for having built the transmitter and the hotel on top of Ještěd, always found unusual technical solutions. In Teplice, he did likewise. The whole design is tailored to serve the main purpose: excellent acoustics. It is visible on the structure with its doubled walls, on the solution for ceilings, until then untested, as well as on the main concert hall shape, reflecting in the roof shape. Hubáček's studio SIAL also developed special acoustic panelling for the Civic Centre.

The experiment was a perfect success. As far as acoustics is concerned, the concert hall is said to rank among the best ones in our country, which is why serious music has been recorded here many times.

In line with Hubáček's motto "We decorate only what we conceived poorly", the building's stark exterior certainly does not attract much attention. Apart from the 1980s aesthetics, it was also the tight budget that left its marks on the building's austerity, as it did not allow to realize everything as originally conceived by Hubáček.

The Civic Centre's design was awarded the main prize at the 1989 World Biennale Interarch. Today it is the home of the North Bohemia Philharmonic, which regularly gives concerts here, and Teplice's only cinema is also housed there. The music hall serves for dancing lessons and concerts.

The colonnade was designed by Otakar Binar, who also authored the interiors in the Hotel Ještěd. Together with the Civic Centre, it was supposed to form a new framework of the completely rebuilt spa town, for which as late as in the 1980s entire streets of Classicist houses had to make way. In their place, low-grade prefabricated blocks of flats were erected, among which, unfortunately, the Civic Centre might represent the sole example of high-quality architecture. 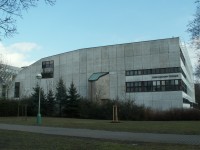