The first theatre in Teplice appeared at the chateau premises at the beginning of the 18th century. The idea to establish it was fathered by Prince Franz Wenzel Clary-Aldringen. Although almost 300 viewers could be seated in the auditorium, its capacity was soon insufficient. The solution to the problem was a proposal for building a municipal theatre.

The original neo-Renaissance building, in the design of which the co-author of the National Theatre Josef Zítek was also involved, was erected at the edge of the spa park between 1872 and 1874. Its capacity was 1000 seats. Thus, Teplice became one the first towns featuring a stone-built theatre and permanent ensembles – dramatic, opera and operetta ones.

However, the theatre did not serve its purpose for long: on the night of 1st September 1919, a tragedy occurred. A night watchman dropped a lamp burner and the fire spread rapidly all over the theatre; the building was completely destroyed. It was a shock for Teplice's inhabitants, as they loved their theatre. Despite the negative post-war situation, the council promptly decided to build a new theatre, and only two years after the fire a new concept was tabled.

The new building was designed by the Dresden architect Rudolf Bitzan. It combines Classicist, Art-Nouveau and Modernist features. The then designation of the theatre as "a city in a city" was not exaggerated: the building comprises a grand and a small theatre hall, a dance floor, a cinema and vast restaurant premises.

People witnessed its re-opening in several phases. The cinema was opened in September 1923, Teplice's mayor Dr. Walter inaugurated the small hall and a café at the beginning of 1924, and the theatre itself opened as the last section with a performance of Richard Wagner's opera the Mastersingers of Nuremberg. The building itself ranked among the largest and most modern theatres in the country. It continued to host three permanent ensembles, with the average of six performances per week – e.g. of Shakespeare's plays, antic dramas as well as light conversational pieces. The opera ensemble staged Mozart's and Wagner's operas, the operetta achieved success with the Czardas Princess or the Gypsy Baron. The operetta maintained its renown in the socialist period, too.

In the 1990s, the theatre was fully renovated; today, only the cinema is inaccessible. The building features a restaurant with a café, hosts balls, concerts and theatre performances – performed by visiting theatre groups only, though, as a permanent ensemble has not been here since 1994. 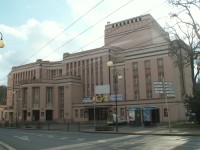