From time immemorial, Jews had belonged to Teplice and played an important part in its development. At the end of the 19th century, the Jewish community numbered 1700 members and ranked among the largest in the country. The Jewish ghetto was located in the area of today's Mírové Square (Peace Square) and the Civic Centre.

The oldest records of the Jewish settlement date back to 1414. Since the 16th century, there was a whole Jewish Quarter. Like in other towns, the Jews' life was not a bed of roses in Teplice. In 1668, the number of Jews in the town was regulated – some of them left for nearby Sobědruhy and a single street was allocated to those remaining. Along the street, a densely built-up ghetto developed and life in it was being limited by an array of regulations. Special marking on clothes and the duty to live in ghettoes were abolished no sooner than under the reign of Joseph II.

Full integration of the Jews was helped by a catastrophe: on 1st June 1793, Teplice was hit by an extensive fire, which destroyed a number of Christian houses and the whole Jewish ghetto. The town was rebuilt in a modern Classicist style and the ghetto lost its strict boundaries.

In the mid-19th century, there were 53 houses within three streets in the ghetto. Various shops, workshops as well as day and night clubs of uncertain reputation could be found here. Thanks to trade and business, the Jews were becoming rich. Therefore, the nineteenth century is symbolized by the Jews' abandoning the ghetto and building their own, palatial houses.

At the beginning of World War II, a lot of Jewish families moved away, with about 7000 Jews leaving the district. Some 511 Jewish houses and 526 flats were left uninhabited in Teplice.

After World War II, due to vast damage the Jewish ghetto was demolished and completely disappeared. Nevertheless, there still is an active Jewish community in Teplice, although comprising mere 100 members. Its base can be found in Lípová Street no. 333. 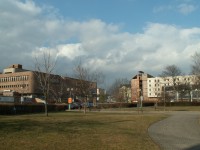