In 1862, Teplice inhabitants celebrated the eleven-hundredth anniversary of the legendary discovery of the local healing springs. In its commemoration, Ing. Adolf Siegmund designed a fountain, which still decorates the Spa Orchard. The fountain is not preserved completely; until the war, it was dominated by a statue of a female bearing an ancient amphora – a Nymph of springs. The fountain decorated with swine heads commemorates the accidental discovery of the thermal spring by a swineherd.

According to the medieval chronicle, dated 1539, by Václav Hájek of Libočany, the swineherd used this way to drive the herd to pasture. A little swine, weaker than the rest, used to limp behind. Once, the swineherd noticed that the little swine would regularly disappear and then stop limping. He followed it to a place where hot steam rose out of mud. The news about the healing spring reached the landlord Kolostůj, the yeoman of Bílina. Thanks to him people from the surrounding area could use the springs for healing purposes.

Hájek's original version did not contain any direct mention of the swines; it was added to the story only in 1607. There are many versions of this legend circulating among people, but one thing is clear: none of the stories are true. The healing springs had already been demonstrably found and used by the Celts. The date 762 was determined rather randomly. 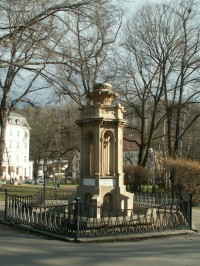