A marble bust at the corner of Lípová Street commemorates the German Romantic poet and writer, who visited Teplice during his travels for treatment.

Seume had a very unsettled and quite an unusual life for his time: he was born in 1763 to a peasant family in the Saxon electorate. He studied at a Latin grammar school and later theology in Leipzig, where he failed to graduate, though. As an 18-year-old he set out on a journey to Paris but was captured by recruiting-officers and forced to serve in the English Army where he was supposed to fight Americans in the War of Independence. In the end, Seume did not take part in the fighting but he was excited about America – he admired its inhabitants' unbridledness and freedom. In his poem Der Wilde – The Savage, he writes: "A Canadian, he does not know the excessive European politeness…"

Two years later, in summer 1783, the poet returned to Europe. Unfortunately, he fell into recruiting-officers' hands again. He tried to escape but was captured and was facing a death penalty. Fortunately, he was saved from the rope by a friend, a Prussian colonel. After his release, Seume graduated in law and became an educator.

Seume undertook two major walking trips to distant parts of Europe - to Syracuse in the south of Sicily and to Russia, Finland and Sweden. He described his impressions from the journeys with his distinctive opinions on political, social and economic situation of that time. Drawing upon his military experience in North America and Germany, he always advocated both individuals' and whole nations' rights to freedom and criticised injustice. His best-known works are Journey to Syracuse, Apocrypha and his autobiography.

He spent the last years of his life in Teplice, where he was treated for his serious illness. Unfortunately, in 1810 he succumbed to it. He is buried in a grave next to Chapel of the Discovery of the Holy Cross, situated dozens of meters from his bust. 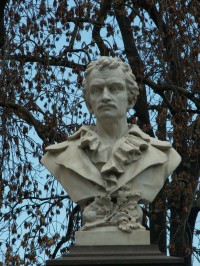