Teplice boasts an array of unique structures, the Church of Saint Elisabeth of Thuringia in Zeyer Square being undoubtedly one of them. It is one of few Czech works by Heinrich von Ferstel, a prominent Austrian architect, who also authored the Votivskirche and the University of Vienna's buildings.

No wonder that Ferstel accepted the contract far from the Austrian metropolis, as in the days of the neo-gothic church construction, i.e. between 1864 and 1877, Šanov's spas were highly renowned. At the time, Šanov, or Schönau in German, existed as an independent municipality. Its councillors endeavoured to reach the town status (surely, one may perceive a trace of rivalry with Teplice here) – and that is why it was necessary to build a Catholic church. Their intention was supported by Prince Edmund Clary-Aldringen, too. Thus, there was nothing to prevent consecrating the foundation stone of the future church, which took place on 18thNovember 1864. You may still find the memorial plaque of the event above the entry staircase.

The construction was delayed by the Austro-Prussian War but the church was completed in thirteen years and consecrated in 1877. Since then, it has served its purpose. It is one of the Teplice deanery's parish churches, since 1990 administered by the Salesians of Don Bosco community. Above the rosace in the church frontage, a statue of Saint Elisabeth of Thuringia is situated. The statue next to the staircase, originally located on the road connecting Teplice and Trnovany, portrays Saint John of Nepomuk. The church is now in a very bad technical condition. The deanery, which administers numerous churches in Teplice and its vicinity, does not have sufficient resources for its reconstruction. 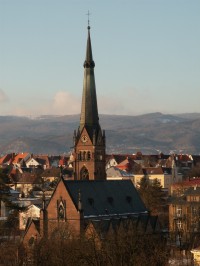