The imposing and historicist villa, with its generous composition, sculptural and stucco decorations attracting attention at first sight, is not an ordinary architectural landmark. Its importance – apart from aesthetic one – lies especially in the fact that its owner changed Teplice into an industrial town and established the tradition of renowned European glassworks.

Joseph Max Mühlig, who had the villa built, ranges with such legends of the Czech glass industry as Leo Moser or Wilhelm Riedel. Mühlig enters the town history in 1890 when he builds glassworks in Řetenice, focused on flat glass production (produced to date). The factory carries the industrialist's spouse's name – Maria Glassworks. The products sold well, which is why as early as 1896, Mühlig could expand the company, establishing Max Glassworks in nearby Hostomice, and, six years later, in 1902, building Sophia Glassworks in Újezdeček. The fact that, from 1908, the company owned a majority share in Ústí nad Labem's Austrian Glassworks Company, attests the company strength. Although the Řetenice plant burnt down in 1919, it did not prevent Mühlig from expanding: in 1924, an acquisition of Ústí's Union Glassworks took place.

In spite of the fact that, within various political regimes, the original Mühlig empire carried an array of names (Mühlig Union, Sklo Union, Glavunion, Glaverbel Czech, the latest name being AGC), it has always held the dominant market position. From the very beginning, Mühlig's plants were acknowledged as Europe's most modern works; today, they are the top flat glass producer in Central and East Europe. 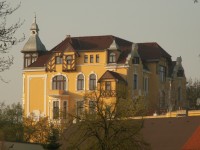