Teplice used to be known as "Parlour of Europe", attracting numerous visitors to high society meetings rather than healing springs. However, war veterans used to arrive as well to heal their wounds.

Teplice's spas were always very successful in their treatment. As long as their spa visit was financially supported by military administration, Austrian soldiers usually stayed with local farmers in Šanov or surrounding villages. In 1800, based on Field-Marshal Johann von Zopf's initiative, the idea of building a spa house for members of the Austrian army came into consideration. At the beginning, the field-marshal faced a problem: to the frugal commander-in-chief, the proposed budget seemed too high, which is why, initially, only the main tract with the east wing was built. The west wing was added later thanks to Commanding General Earl Karl Kolowrat. The construction was performed in phases between 1804 and 1807. The classicist building composes of four wings surrounding the inner court.

The spa house for the Austrian Army brought a new dimension to Teplice's spa business and ensured substantial income for the municipality. In 1880, the Military Spa underwent a thorough reconstruction, which gave it today's appearance. Since its foundation, it has been used as a spa without interruption, even though it does not host Austrian soldiers any more. 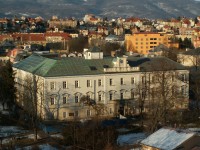