Fields, vineyards and orchards used to spread in the area of Letná. A beautiful view of the countryside attracted spa guests and a promenade was established here for their comfort.

On the south part of the hill, a master bricklayer Franz Jerke had his small vineyard and a cherry orchard. He built a gazebo there, where he served refreshment to visitors. Every year he added rooms, staircases, ledges, terraces and towers to the basic structure – all made of rubble bricks, stones and clinker. And it was the clinker which gave this strange building its name – the small castle was called Schlackenburg, which stands for "Clinker Castle". Jerke started its construction in 1805 and worked tirelessly till his death in 1826.

Škvárovník hosted a popular restaurant, visited by a number of famous guests, Johann Wolfgang Goethe and Richard Wagner among others. On the restaurant terrace, Wagner wrote first sketches for his opera Das Liebesverbot – The Ban on Love. Even the Prussian King Frederick William III was among the regular guests. Between 1812 and 1839, the town welcomed him almost every year. Jerke named one of the halls in his honour – the King's Hall.

As the spa fame declined, Škvárovník fell gradually into oblivion as well. Nevertheless, it served as a restaurant till the 1980s, only then it was cleared out and started to dilapidate. A prominent Communist Party official pushed ardently for its demolition, as he wanted to gain the lucrative building plot for his intended family villa. Putting Škvárovník under a preservation order as a national monument in 1987 thus came virtually in the last minute.

The current owners strive to repair the romantic castle. In recent years, the roof has been repaired. However, the future of Škvárovník remains a question without an answer. 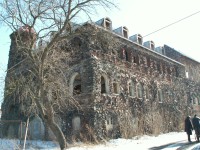