The Patrol of Emperor Franz Joseph I.

A bizarre landmark of Letná, formerly King's Heights, carried a majestic name of the Emperor Franz Joseph's Lookout. In 1877, the architect Gustav Jirsch projected all important styles into it – from a Gothic pointed arch to a Renaissance window.

The observation tower, which offered both a restaurant and an accommodation, was built by one of Teplice's most important associations of the second half of the nineteenth century – The Mountain Association, which – like the current Czech Tourist Club – looked after footpaths in the Ore Mountains and the Czech Central Mountains. Thus, the Emperor Franz Joseph's Lookout did not only serve as a popular destination for spa guests but also as a seat of this active club. At the turn of the 19th and early 20th century, in the summer the garden café also hosted evening symphonic concerts.

After World War I, in connection with the fall of the Austro-Hungarian Monarchy, the place was renamed the High Lookout. The First Republic saw the place still teeming with locals as well as spa guests. After World War II, however, the observation tower started to dilapidate. Back then, an art studio and somewhat later an amateur radio station were located here.

The 1990s represent a sad chapter in the landmark's history. Its owner's business plan did not turn out well and the building decayed uncontrollably. In 2003, an unexpected thing happened – the structure was acquired by one of the region's major companies, which performed its complete reconstruction, finished in spring 2008. Unfortunately, the building, literally raised from the ashes, is not open to the public. 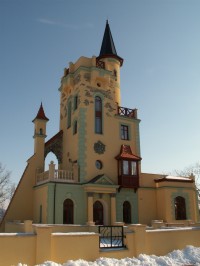