Beethoven and Goethe meeting the empress

Object No. 05 | the place is indicated by a plate at the crossing of paths, Chateaux garden

A few years after both artists died, Bettina von Arnim, a social butterfly of the early 19th century, in a letter to her friend cited the following testimony, allegedly confided to her by Beethoven himself: "Returning from an evening walk, we met the whole imperial family. Goethe released my arm and stepped aside the path. I could not make him budge a step further. So I jammed my hat down over my brow, fastened my overcoat, folded my arms behind my back and walked right through the crowd. The princes and the courtiers formed a double row, Duke Rudolph raised his hat and the empress saluted first ...," while Goethe was respectfully bowing down to the procession.

The legend of the proud composer and the subservient poet was later made famous by an 1887 lithography entitled Incident in Teplice, by a German painter Carl Röhling. The only blemish on the whole story is the fact that it probably did not happen as described. Bettina von Arnim was a very self-confident young gentlewoman; she personally knew Liszt, Schumann, or Brahms. She lived a platonic relationship with Goethe; it started in 1806 when Bettina was 21 and Goethe 58 years old. She remained his muse till the end of his life. In spite of the fact that she herself wrote and composed, she became famous only after publishing her correspondence with Goethe, entitled Briefwechsel mit einem Kinde, Correspondence with a Child. It is unclear, though, where Bettina quotes real letters and where she embroidered them in order to make the story more appealing.

There is the same uncertainty about the presentation of the famous meeting. Nobody has ever seen the original letter in which Beethoven describes the encounter to Bettina. Therefore, she may be suspected of embellishing the story to make Goethe look like a coward. We can only speculate what personal motives lead her to do it.

Apart from the famous legend, there was nothing else that both men's meeting would bring about. Their worlds were so distant that nothing more than exchanged pleasantries at the spa promenade could be expected from their parallel stays. Beethoven stayed in Teplice in 1811 and 1812; Goethe visited the town in 1810, 1812 and a year later for the last time. Nevertheless, the story which Bettina von Arnim revealed to the world many years later lives on. Its interpretation may be found in Milan Kundera's novel Immortality. 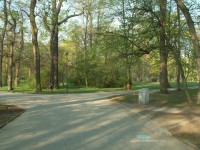