Church of the Holiest Heart of the Lord, so called “Red”

The history of the so-called "Red Church" is inherently linked with the history of Trnovany, which, at the end of the nineteenth century, became an industrial centre and increasingly more inhabitants started to move in because of work. In 1900 their number exceeded 12,000, the municipality organized regular markets and was connected to Dubí and Teplice by a tram line. Since 1905 a Lutheran Christ's Church, the so-called "Green Church", adorned the municipality. In order to reach a town status, though, Trnovany needed a Catholic church, too.

A Church Construction Association had already been founded in 1895. Thanks to believers' donations, the construction could finally be launched at the end of 1907 and it necessitated relocation of the Bystřice Brook, which to this day flows under the surface of the adjacent park. The three-aisle basilica with its 47-metre tower came into existence in mostly local craftsmen's hands, following a Teplice builder Jirsch's design. The completed church was already consecrated on 24th October 1909.

The church interior has survived numerous historic turmoils, enduring as a memorial of Trnovany's inhabitants of those days. Its furnishings are predominately neo-Gothic, but there are also two altars here brought from sanctuaries serving Trnovany's inhabitants before the church was constructed. The right side-altar was brought to the church from the Saint Roch's Chapel, which used to stand in the adjacent park. The Holy Cross Chapel contains an original altar from a girls' school. In the left aisle an altar depicting Madonna as a patroness of Trnovany can be found, rendered in the Beuron Art School style. The interior murals were painted by Alfred Böhm according to his own sketches in the 1930s. The church's five bells were cast in nearby Chomutov in 1911, one of them summoning believers to gather for worship, another one serving as a death-bell.

In spite of its correct name being "The Sacred Heart" Church, it is nicknamed "Red Church" owing to its ceramic wall tiles' colour. In the past hundred years, its vicinity has changed significantly and the town of Trnovany was connected to Teplice, but the church has maintained its position of one of Masarykova Avenue landmarks. 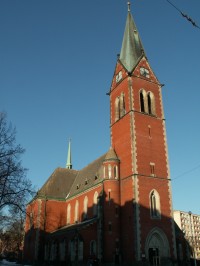