The House 'At the Golden Sun'

In 1812 the Golden Sun House in Lázeňská Street accommodated Ludwig van Beethoven; it was here that he wrote two of his nine symphonies and the letters to the Immortal Beloved here.

Beethoven was probably born on 16th December 1870 in Bonn. From the age of 22, he lived in Vienna where he studied composition with the best composers of his time – Haydn and Salieri, the imperial court's composer. Beethoven's work quickly found patrons among rich noblemen. Thus, the composer was able to work freelance, which was not very usual at the time. During his Vienna stay, at the age of 25, his hearing problems began to develop. He suffered from a serious form of tinnitus, an ear murmur – and the problems kept worsening. Rumour has it that, when composing, he was using a special rod attached to the piano's soundboard; biting the rod, he could better perceive sound vibrations. In 1811 he decided to leave for Teplice as a famous spa, perhaps with the belief that his disorder would get better.

He came to Teplice for a second time on 6th June 1812. Rather than with his health he was occupied with a mysterious lady. We do not know her name or her social status, but Beethoven himself called her his Immortal Beloved, and from Teplice – possibly to Carlsbad – he wrote her several letters. The platonic but intense love probably inspired him to compose the Seventh Symphony. Here in the Golden Sun House he probably wrote his Eighth Symphony as well.

The best-known event of Beethoven's stay in Teplice is his and Goethe's encounter with the imperial family in the Chateau Park – only a brief episode, possibly a mere legend, but one that attests significantly to the artist's position in the society of that time.

In 1816 Beethoven went completely deaf. Nevertheless, he continued composing for a few more years, authoring e.g. the Ninth Symphony with its Ode to Joy. He lived in absolute silence for eleven years and died in Vienna on 26th March 1827.

Teplice's stay did not play a fundamental role in the genius' life. After all, unlike Goethe, Beethoven never returned to Teplice. Since 1964, the North Bohemia Philharmonic has organized the Ludwig van Beethoven Music Festival in Teplice. 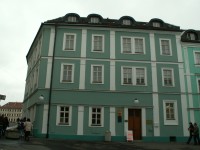