Chapel of the Finding of the Holy Cross

The inconspicuous Chapel of the Discovery of the Holy Cross (St. Kreuzauffindung) was built between 1728 and 1730 and figures among few preserved Baroque monuments in Teplice. At the time of its construction, it used to be a part of the cemetery situated next to the Šanov-bound road. The town of Teplice, encircled by medieval walls, used to start at today's U Krupské brány Street.

In the nineteenth century, as Teplice expanded beyond its original walls and began to merge with neighbouring Šanov, the cemetery between the spa buildings and newly rising villas turned out to be an obstruction. In 1864 it was abolished but the tombstones belonging to the former mayor Wolfram and the German Romantic poet Johann Gottfried Seume, who died in Teplice in 1810, were preserved. Seume's tombstone is situated next to the chapel, at the streetside. The cemetery was replaced by a park, established alongside Lípová Street and carrying Seume's name till World War II. Nowadays it is called Havlíček's Gardens (Havlíčkovy sady), despite being still dominated by the poet's bust.

The chapel is inaccessible most of the time. Nevertheless, peeping through a crack in the door, you may still spot a footprint of Teplice's history. Inside there are plaques bearing the names of the officers who died in the 1813 Battle of Chlumec and Přestanov. The spa Teplice was then declared a neutral town and wounded soldiers of the Austrian, Prussian and French Armies were treated here. 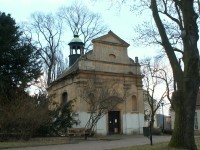