The Business Academy building is located on the top of a rocky spur, formerly the Mont de Ligne knoll, which rises over the Bystřický Brook's valley. In the nineteenth century, a romantic mirrored gazebo used to be located here, later converted into a scenic restaurant. It was called Pepferbüchsel – which means Pepperpot. However, the popular restaurant had to make way for Šanov councillors' ambitious plans.

In 1877, the Church of Saint Elisabeth of Thuringia was supposed to be completed in today's Zeyer Square. The structure was requisite for fast-developing Šanov to reach the town status. The councillors wanted to raise Šanov's growing prestige further, which is why in 1875 they decided to construct a new building on the spur, intended for the German classical grammar school. Until then, the grammar school had had its seat in today's regional library. The landscaping commenced in the same year; the whole porphyritic rock was lowered to today's level and the construction followed in 1893 and 1894. It cost 95,000 guldens and the school palace was put into operation in September 1894.

The structure was designed by David Ferber in the neo-Renaissance style. Along with the synagogue and St. Bartholomew's Church, the new school building immediately became the town's significant landmark, namely thanks to its tetragonal, 45-metre tower. Its purpose was not only decorative – it also contained the so-called "carcer", a room where naughty students used to get locked up. The Business Academy Teplice has been located here since 1953.

The Mont de Ligne spur still offers unique views. It is freely accessible along the right side of the building, where you can encounter views of Šanov over to Janáček Gardens, Prosetice with its panel apartment buildings and Letná. 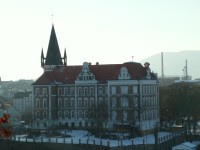