Jews belonged inseparably to Teplice for four centuries; one of the largest Jewish communities in the Czech lands was located here. No wonder that there was a synagogue here since as early as 1550, situated in the area of today's Mírové Square (Peace Square). However, during the 17th century the Jews were expelled from the town centre. Unless permitted by authorities, they were not allowed to move, settle down, sell or buy a house or even make complaints to the Prague rabbi. Only the Edict of Tolerance issued by Joseph II removed the worst discriminatory regulations, but the full rights for Jews were brought about no sooner than in the revolutionary year of 1848.

At that time, the Jewish community started to grow rapidly and the small synagogue in Sobědruhy could not seat all believers. Therefore, in 1872 Teplice's Jewish community bought a half-hectare lot in what was then Payerova Street (nowadays Lipová Street) for 25,000 guldens, planning to build a large house of worship. In 1879, a Temple Construction Association (Tempelbau Verein) was established, which was intended to create a construction fund, get new supporters and push through the synagogue construction. Everything was prepared in summer 1880.

The building plan was elaborated by a Vienna architect Wilhelm Stiassny. The foundation stone was laid in mid-winter and the construction started on 11th March 1881. In spite of many problems, the synagogue was completed in 18 months and the final building approval, held in a festive manner, could take place on 6th September 1882.

The overall costs grew to 100,000 guldens. The great feast of consecration took place on Sunday, 10th September 1882, when a procession set out for a symbolic journey from the old synagogue to the new one. Its consecration was witnessed by 2,000 people. In the evening, there was a celebratory banquet in Prince Clary's Garden Hall. Also, a tin medal commemorating the festive consecration was issued.

The architect designed the building in the neo-Renaissance style with oriental features: its main large dome with the Star of David was supplemented by four smaller domes in the building's corners. The structure itself was of monumental dimensions, towering to the height of 42 metres and occupying the area of more than 1,000 sq. meters. It became one of the town's dominants and, it must be noted, only Pilsen's synagogue could compare to it in size.

In 1938, most Jews left the town. The synagogue became forsaken. The municipality wanted to transform it into a museum, municipal archives and a concert hall. However, the plans failed, as in the night of 15th March 1939, the synagogue was set on fire and burnt to ashes by the morning. Thus, in such an undignified manner, one of Teplice's architectural gems vanished. Today, the synagogue and the destinies of Teplice's Jewry are commemorated by a memorial, built in 1994. 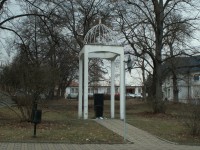