An elegant neo-Romanesque basilica, which Teplice's Lutherans built between 1861 and 1864, stands on one of the town's highest knolls, forming significantly Teplice's skyline.

The originator of the building was the German architect Friedrich August Stüler, whom the Prussian King Friedrich Wilhelm IV probably recommended for the design elaboration. His Majesty regularly visited Teplice's spas and both morally and financially supported the idea of building a new Lutheran church. Legend has it that the king himself drew several sketches, which the architect respected in his design. August Stüler was one of the eminent architects of his time – he worked as the Prussian king's court architect and, apart from a series of other designs, he elaborated plans for the Old National Gallery in Berlin.

"The Peace Church of Bartholomew the Apostle" was the building's full name. The architect designed it as an early Christian basilica, with Romanesque decoration and an airy columned foyer, rather unusual in our country. Those who dare to climb over the wall and ascend up to the church gate will be rewarded with an extraordinary view of Teplice from among the columns.

The steeple was added to the church only eighteen years later; it was completed in 1882. Stüler used plans by his colleague Ludwig Persius, a construction councillor in Berlin, although Persius had died more than twenty-five years before the construction.

When, after World War II, German inhabitants had to leave Czechoslovakia ingloriously, the church fell to the Czechoslovak Hussite Church. However, as early as 1965 the congregation started to lack sufficient resources for its maintenance, which is why they transferred their activities into the neighbouring parish office's chapel, where they have been active to date. In 1990, the church was sold to a new owner, who established an upscale restaurant there. Later, the restaurant catered even for techno parties and entertained lovers of other dance styles. After the company's bankruptcy, the church changed hands again and the new owner is looking for its new utilization – only occasionally it is used for concerts and private social events. 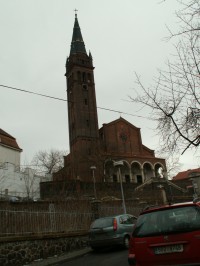