At the end of Kollárova Street, there has been a striking empty lot since 2008 – formerly the site of the Emperor Franz Joseph's Jubilee Spa, built in 1908 in commemoration of the 60th anniversary of the emperor's ascension to the throne and the 50th anniversary of establishment of the municipal savings company, which sponsored the construction.

In the 19th century, Teplice was a renowned spa town, but local inhabitants as well as others still missed a cleansing facility. The project in the spirit of German Renaissance with Art Nouveau features was designed by Ing. Odon Zdarek.

Apart from swimming in a thermal water pool, the Jubilee Spa, later renamed Municipal Spa, offered an inhalatorium and shower, tub, aerial, steam and solar baths till the beginning of the 1990s.

The downfall story commenced in the 1980s with a badly performed reconstruction, but the spa worked till 1993. Then it was sold to a private company, which, contrary to its promises, closed down the building and lost interest in it. It passed through many hands and, in spite of numerous ambitious plans, the premises were never repaired. Due to their state of disrepair, there was no other way out than to release the preservation order and demolish the spa.

Instead, a new structure is to be erected here in the near future. It is up to Teplice's inhabitants whether they let the investor itself decide what to build or whether they join in the discussion, as is common in developed countries. Otherwise, we will be left with no more than nostalgic memories of the formerly magnificent institution, immortalized in old photos, postcards and written testimonies of those who were lucky to enjoy treatment in the Jubilee Spa. 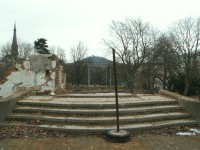