Object No. 12 | crossing of Josefa Suka and Novákova street, Šanov

In the 19th century, botanic gardens used to be, as their founders' and patrons' showpieces and places of learning about things distant and exotic, a common part of major cities. In Teplice, the establishment of a botanic garden was Prince Clary-Aldringen's merit. At that time, the buildings carried the name of Stadtgärtnerei, i.e. Municipal Plant Nursery, and served mainly the spa facilities, to produce fresh flowers and to overwinter palm trees. Thanks to Ing. Marie Sternthalová's efforts, the glasshouses were reconstructed and the garden was opened to the public in March 1975. In 2004, a large restoration of the garden was initiated; the old glasshouses were demolished and newly built.

At present, the Botanic Garden covers two hectares; approximately one half is formed by the external exposition and the display glasshouses occupy 2400 m2. Above the glasshouse entry, there is a stone sculpture of the Mayan god Yum Kaax, the patron of wild plants and game. The entrance hall is stylized in the shape of a South-Asian pagoda and Teplice's artists took part in its decoration. From here, visitors may continue to the Xeric Glasshouse, housing plants adapted to a dry climate, for instance from Mexico or Southern Africa. Also, it contains rare plants from the island of Socotra, situated in the Arabian Sea between Yemen and Somalia. In the tropical glasshouse, visitors are welcomed by a tropical rainforest. Apart from plants from all over the world, the greenhouse shelters yellow-bellied sliders and several terrariums: one with African mouthbrooders, two Asian terrariums (one of them represents a sea shore with mangroves and is home to mudskippers, the second one is inhabited by labyrinth fish) and the last three are American. These represent the "black Amazonia" populated by angelfish, tetras and freshwater stingrays. In the subtropical glasshouse, you can visit the Andes, the Himalayas and New Zealand, as well as a small exposition of brown coal formation in the foothills of the Ore Mountains. There is also an exposition of carnivorous plants here and one of the garden's rarest exhibits, a hundred-year-old African conifer Afrocarpus gracilior. A funny curiosity is the crossworders' garden bed: indeed, here you will find the plants which you know only from crosswords but whose names do not represent anything material to you – cola, coca, abaca, balsa, Annona. They are supplemented by useful and pharmaceutically important plants.

The garden is open to the public every day in the week except for Monday, from 9 a.m. to 5 p.m. in winter months (October to April) and from 9 a.m. to 6 p.m. in summer months (May to September). 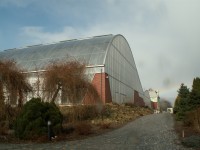