At the end of Kmochova cesta (Kmoch's Path), on the green-marked hiking path, there is a cast-iron gazebo, below which you can find one of the best views of Teplice.

The viewpoint itself is located on the slope below the gazebo; you will encounter a view of the whole town as well as its vicinity, dominated by the Ore Mountains massif. On the right-hand side of the ridge, you can see a turreted structure – the hilltop of Komáří vížka (Mosquito Turret Hill), connected with Bohosudov via a chairlift. On the other side of the ridge, towards the northwest, in good weather conditions you can recognize three wind power plants close to Vrch tří pánů (Three Lords' Hill) by Nové Město.

But let's return to Teplice. Šanov spreads out below the lookout. On the right, just below you, there is a shell-shaped concert pavilion, where summer season concerts by the North Bohemia Philharmonic Orchestra take place. On the other side of the park, there is the yellow building of the Stone Spa and, on the right, the elongated structure of the no-longer-used Snake Spa. Behind it, towards the mountains, there is the Military Spa. The park is completed by St. Elisabeth's Church with its tall, thin belfry rising just opposite of you.

Now we can shift our gaze to the left towards Teplice centre. The building resembling a rock-top castle is a seat of the business academy. The thin red belfry on the right of the academy belongs to St. Bartholomew's Church. Between the historical centre and St. Elisabeth's Church belfry you can spot an elongated double-gabled building – the central railway station. On the right, behind Šanov, Trnovany is located. However, most of its original buildings were demolished and replaced by housing estates and department stores.

Also worth mentioning is Trnovany's church, called "Red Church", whose belfry sticks out from behind the houses on the left-hand side below Komáří vížka. Closer to you, to the right of the church belfry, there is a small blue glassed-in dome of the swimming hall. Further away, the town rises, turning into Šanov II quarter, dominated by the highest tower block called God's Finger. 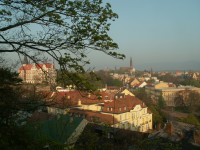