The hotel in U Hadích lázní Street carries the name of Teplice's most famous patriot. He won renown after an Austrian polar expedition under his leadership discovered a then unknown archipelago in the far north.

Julius Payer was born in the house U Jitřenky (the Morning Star) in Šanov (Schönau) on 2nd September 1841. After his studies in Cracow and Vienna he served in the army. During his military service he undertook his first alpinist climbs: in four years, he reached 118 mountain tops, most of them as a first man ever, and drew all of them into his own high-quality maps. In 1868, his cartographic talent was noticed by his commanding officers and, consequently, Payer could pursue map-making on a professional basis. Thanks also to his experience in the Alps, in 1869 he was recommended for a German expedition to Greenland. Upon the success of this mission, he was charged with the leadership of two independent expeditions. During the second one, which took place between 1872 and 1874, the polar explorer and his crew faced death several times. One month after setting sail, the ship froze in icebergs. In August 1873, after a year of such sailing, Payer chanced upon an unknown land, which he named Franz Joseph Land. He managed to map a substantial part of the archipelago. He would have probably continued researching it but since the crew faced a serious lack of food, they had to set sail to return in May 1874.

Payer covered his expeditions in a detailed and erudite travel book. After returning from his last expedition, he devoted himself to painting but remained faithful to polar landscapes. His most famous realistic paintings called "Never back!" or "Polar catastrophe" witness what experiences he brought back from his voyages.

Julius Payer died on 29th August 1915 and was buried in Vienna. A mountain in the east of Greenland is named after him. He made his hometown Teplice immortal in the islands of Franz Josef Land, where you can still find Schönau Island and Teplitz Bay. 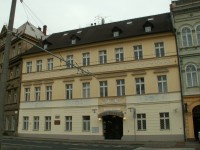