In the 19th century, Teplice's fame as an important European spa resort was great. In his 1828 book Austria as It Is, Charles Sealsfield calls the town "the celebrated Temple of Hygaeia for all those numerous disorders produced". Diplomats, crowned heads, scientists and artists were among its visitors – no wonder Teplice was called "Little Paris" or the "Parlour of Europe".

Although the present Stone Spa building comes from the twentieth century, it reminds one of a much older spa tradition, which also gave it its name. The word Stone refers to the stone edge encircling the spring, which was covered only by wooden, shingle-roofed scaffolding till 1800.

It was Šanov's former mayor who had the lofty classicist Stone Spa building constructed between 1800 and 1802. The building was much simpler both in ornamentation and dimensions than today's Stone Spa: It was a prismatic, single-floored building of a T-shaped ground plan. Because of lighting, the space over the spring was not covered and, consequently, the spring water easily mixed with rain water. This is why the opening was covered by a copper dome in the middle of the 19th century.

Close to the Stone Spa, there used to be Stephen's Spa, dated 1806, sometimes called Temple Spa. The charm of the place was imparted by the surrounding landscape – trees, bushes and the Bystřice Brook, which circumscribed the buildings, and the spa was thus accessible via small vault bridges with ornamented balustrades.

Both buildings, redesigned several times, were pulled down in 1910 and replaced by a palatial pseudo-baroque structure with classicist traces, erect till today. Its architects were Jirsch from Teplice and Arnim from Potsdam. The festive opening of the new building in 1911 was attended by Archduke Charles, the later successor to the Habsburg throne. The spa was named after Franz Joseph's spouse Elisabeth, known as Sissi, which later, after the fall of the monarchy, became unacceptable and the spa returned to its original name. 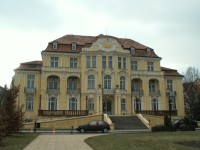