Today's Mlýnská Street was established between two massifs formerly called Mont de Ligne and King's Heights. Teplice's inhabitants mined away a large part of them to gain building material. The relatively small valley had been formed by a strong hot spring, which, for millions of years, had been springing where the Beethoven Spa House is located now. Even though the no longer existent stream called Katzbach, or the Cat Brook, was approximately only 650 metres long, the powerful spring boosted it enough to enable people to build mills here.

The first written mention of the mills on the Cat Brook dates back to 1468. The municipal chronicle mentions four mills in this location and a fifth one in Prosetice. These were the first buildings outside of medieval Teplice's walls. Gradually, more houses were built but there were not more than ten of them for a long time. The break point came after the town fire of 1793. The town recovered from the catastrophe quite quickly and even accelerated its development. The first direction in which Teplice started to spread was along Mlýnská Street connecting Teplice and Šanov. It was also the direction where the road to Prague led.

In 1815, there were 21 houses here and more followed soon. Back then, people mined away the rock and partially embedded their houses into it. Remnants of cellars and various rooms are still visible here. The whole of Mlýnská Street was predominantly of classicist design, even though in the second half of the 19th century new, historicist but also Art Nouveau buildings were added, sometimes even replacing the original ones. The terraced houses in Laube Square and today's main post office come from the same period; originally, the post office was built as the Prussian King Hotel. In the middle of the century, an inner courtyard area was developed, establishing so called Malá Mlýnská Street (Lesser Mill Street), where mainly smaller houses and yards were located.

The street's mill-wheels stopped when the hot stream dried out, i.e. in 1879. Consequently, the mills gradually perished. On the site of the so called Upper Mill, the new Imperial Spa was built in 1845. Its present design was created by the famous architect Max Loos von Losimfeldt. At the opposite side of Laube Square, Teplice's famous lawyer and representative Dr. Stradal built an exquisite family house titled the Russian Tsar House, following again Max Loos' design. On the site of another mill, Prince Schwarzenberg constructed a pseudo-Renaissance apartment house.

Before World War II, there were about 60 houses in Mlýnská Street. Both the war and the changed social regime brought a gradual destruction to the street. First, demolitions of fairly damaged houses were performed. No investments were made into repairs and the remaining houses kept dilapidating. The last premises were demolished in 1987. In part, they were to be replaced by a new spa house but it has never been completed and its torso still protrudes in an empty and gloomy space, which used to be such a charming part of the spa town. 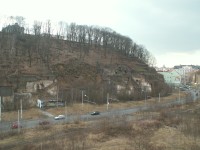