The Chateau Park originated in the 16th century together with the construction of the chateau, when stone-built castles went out of fashion and the nobility moved to more comfortable and representative residences. The Jesuit Bohuslav Balbín, who was familiar with its Baroque appearance, considered it one of the most beautiful parks in the Bohemian kingdom. The park design changed with fashion, this time assuming French patterns: green mazes, grottos, fountains and carefully planted, geometrically perfect flower beds were added. Further changes were performed at the end of the 18th century by Johann Nepomuk Clary-Aldringen, the new owner of the Teplice estate. This time the garden transformed into an English park: the flower beds were substituted by vast lawns, ponds and rare trees.

The park stretches around the Upper and Lower Ponds. In the middle of both ponds there are artificial islands, the one in the Upper Pond bearing the name of Elisa Alexandrina, Prince Edmond's wife. In the past the island used to be accessible via a small cast-iron bridge with an ornamented gate carrying the sign “Elisalex Insel”. A wooden gazebo, still in existence but quite damaged now, used to serve as a sheltered mooring for the princely family's boats. The family used to hold evening cruises on gondolas while musicians played Mozart's pieces.

The Chateau Park also contains a classicist gazebo and a number of statues gathered from the vicinity, Beethoven's bust, a plaque marking the legendary meeting of Goethe, Beethoven and the emperor's family, a closed municipal lido and a chateau theatre where weddings take place. In its gable, Cupids hold a sun disc and a lyre, symbols of Apollo, the Greek god of art.

In 1936, a spa guest wrote in her notes about the garden: “Peace and quiet breathe out here, one is protected from the troubles and pains of life, deep tree shadows form a wall between our everyday life and a piece of a dream we indulge in. When will Goethe's figure appear on this path? Hasn't Beethoven just passed that bush with his head bent down? Wasn't that Wagner's head looking out behind that thick trunk?”

We are not sure whether you will spot the European greats in the park. In any case, you can observe and feed squirrels, swans, ducks and fat carps. The playground “At the monkeys” is a popular place for families with children; please, do not feed the monkeys. 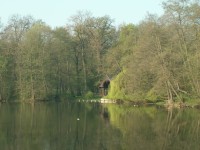