On the slope of Maxe Švabinského Street, there is a white residence. At first sight quite an inconspicuous building, it is in fact a large functionalist villa of the Seger family dating back to 1932. Ernst Seger was a partner of Vienna's tie factory Dénes & Seger, which relocated to Teplice.

The villa was designed by the architect Kurt Spielmann (1903 – 1943), who also built several villas, a block of flats and a factory in Prague. In the case of the villa Seger, Spielmann was clearly inspired by the functionalist Adolf Loos, the architect of the famous Villa Müller in Prague's Ořechovka quarter. Here, too, the architect skilfully developed Loos' Raumplan in his elaboration of space. Also, the concept is well supported by an intricate ground plan. The architect solved the problem with the sloped terrain by embedding the technical rooms – the garage and cellars.

The Segers did not live long in the villa. Given their Jewish origin, they could only stay in Teplice till the end of the 1930s, i.e. until the occupation of the Sudetenland by the Nazis. The villa was confiscated in favour of the town. Later, the family members were murdered in the concentration camp Malý Trostinec. The architect Spielmann died in Auschwitz.

After World War II, the villa was administered by a brown coal mining company and it is possible that it continued to serve for residential purposes. As early as in 1949, authorities declared the villa to be in bad technical condition – due to a derelict sewerage system the villa was water-soaked and neglected eaves caused ceilings partially to collapse. In the 1970s and 1980s, a kindergarten was located in the villa. After the revolution, the residence was acquired by a new owner, who had it sensibly reconstructed. The interior is new but the original staircase and the upstairs sliding door were preserved.

As the villa is occupied by its owners, tours are not possible. 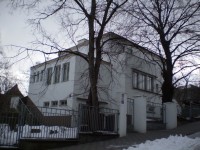