This unobtrusive building, nowadays situated at the east end of Alejní Avenue, in the close vicinity of a supermarket, was founded by the Sisters of Mercy of St. Charles Borromeo in 1865. The convent served mainly as a girls boarding school where, as the chronicle says, “the girls were brought up in a verily Christian spirit, as well as educated and trained in order to be able to comply with the requirements of their time.” Even the congregation itself sought to meet the requirements of the time. Apart from the boarding school, it also established nursery schools and kindergartens “so that the parents could earn bread for their children.”

Although the building was completed in 1866, the nuns and their protégées started to reside at the convent only two years later. Much later, on 14th July 1886, a little church, which was connected to the convent during a period of reconstruction, was consecrated. The convent chronicle says: “The little church was decorated by Benedictine masters, who gave its bare walls an almost magical appearance.” These talented Benedictines came from the Na Slovanech Monastery in Prague, commonly known as Emauzy. Most of them were not of Czech nationality. In the 1880s, this Prague monastery served as an asylum for the Benedictine community from Beuron, Germany. At that time, German Chancellor Bismarck triggered the so called Kulturkampf (Cultural fight) – an endeavour to reduce the Catholic influence. Consequently, the Beuron Art – a remarkable attempt to reform a sacral fine art – came to Bohemia and also Teplice.

The decoration of Teplice's convent chapel was mastered by Fridolin Steiner from Switzerland, one of the Beuron Art School's three founders. The works were completed in 1890. Thanks to that, along with the Church of St. Gabriel in Smíchov, Prague, the chapel is one of the oldest fully preserved monuments of Beuron style in the Czech lands. Research performed in 2008 revealed the fact that the decoration of the chapel had been partially altered by a younger generation of Beuron artists. The works of 1931 were led by the monk Antonín Vrbík.

In 1930, the nuns had a school built at their own expense. Today, it is (together with the convent) a part of the grammar school. After the expulsion of the nuns in the 1950s, the chapel was used as a warehouse and workshops. Nowadays, the civic association Pro arte beuronensis – the Society for the Grammar School Teplice's chapel restoration –, seeks to preserve the chapel. Information about the opening hours may be found on the notice board next to the entrance. 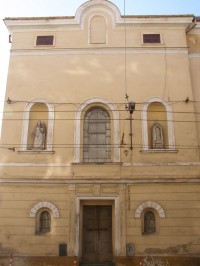