At the end of Zelená Street (nowadays in fact non-existent), a German Realschule has been located, built in 1904. Except for the final stage of World War II when, along with the rest of Teplice's schools, it served as a hospital for German soldiers, it has always been used for educational purposes: students of the Realschule, business academy, teachers training school, general education secondary school and even the conservatoire studied there. Nowadays, it is Teplice's only grammar school.

The construction was designed by Wenzel Bürger, an architect from the Saxon city of Chemnitz, who also designed his hometown's synagogue, catholic school and a series of sumptuous houses. His work carried the text “Der deutschen Jugend in deutscher Stadt ein deutsches Haus“ (i.e. A German house in a German town for the German youth).

A big development of the Grammar School Teplice started after 1993. Its premises were enlarged by the inclusion of two buildings on the opposite side of Alejní Avenue – the Borromeo Sisters' former convent and a civic school, which belonged to the convent. The convent includes the Chapel of our Lord's Triumphant Sacred Heart with decorations by the Beuron Art School. In 2000, all three buildings were interconnected by a footbridge spanning over Alejní Avenue. Since 2008, the school has also boasted a new sports area and a heated greenhouse.

Over 800 students currently study at the grammar school, taught by approximately 70 lecturers.

The building has been a state-registered historic monument since 1987. Nevertheless, apart from exceptional open days tours of its interior are not possible. 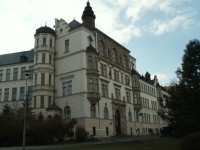