Church of Saint John the Baptist

In the Catholic tradition, Saint John the Baptist is the patron of Malta, Burgundy, Provence and a whole range of professions, as well as waters and healing springs. This is also why he is Teplice's patron and the early-Baroque Dean Church in the Chateau square is dedicated to him.

Its history goes back to the very beginnings of Teplice. The church itself is probably built on Renaissance foundations, though. Its present design of a three-aisled basilica dates back to the years 1700–1703. Four years later, the tower was added, containing a watchman's flat and three bells – the youngest one was cast in 1659, the middle one, a Renaissance bell, in 1540. The oldest bell, with a pieta, is dated 1482.

The bond to Teplice's history is not limited to location, though. In the church's right aisle, members of the Vchynský family, who ruled Teplice since the end of the 16th century, are buried. The left aisle contains a crypt of the family whose bond to Teplice is the strongest, of Clary-Aldringens. They had been getting buried here until 1751 when the family crypt was moved to the Chateau Chapel and later to the newly-built Church of our Lady of the Immaculate Conception in Dubí.

In early 1990s, the church was completely reconstructed and still serves the Roman Catholic Church. In summer seasons, the church tower is also made accessible; its gallery offers a view of the town's historic centre. 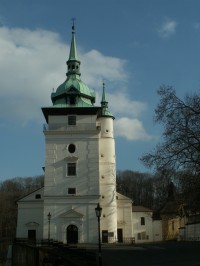